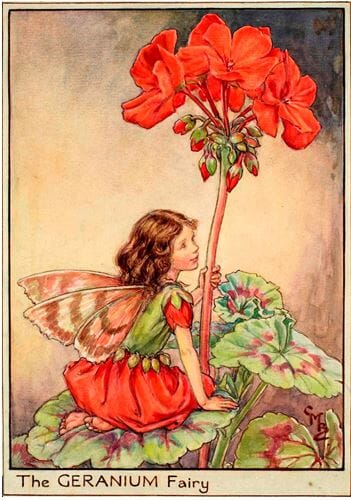 I quite often find myself having confused conversations with my mum about “Geraniums” both of us talking about completely different plants that need quite different care and wondering what on earth the other is going on about, until I twig and say, “Do you mean pelargoniums?” to which mum looks at me with a “well of course” expression. For as long as I can remember my mum has always grown pelargoniums, masses of them, all different shapes, sizes, colours, all in different individual terracotta pots, all spread out across the garden brightening up the patio and the little nooks and bare spaces. Honestly the garden was crammed and every evening, especially in the summer mum would be out there watering them and dead heading them, sometimes I would help, but being a teenager, probably not very often. And then, in the autumn as the weather changed and got progressively cooler and damper my dad would head out to get the greenhouse bubble wrapped and insulated and the migration to move them back into the greenhouse from their summer locations would commence. Getting them all into position to optimise the space was quite something, dad would often go a bit Heath Robinson and create new shelves and spaces in the already heaving green house. Mum would then begin the process of cutting them all back to avoid die back, rotting and disease. Finally, a heater would be installed, which would be switched on faithfully every night to ward off the dangers of a hard frost. And so, my initial understanding of geraniums was born. It wasn’t until I embarked on my career change and began attending Merrist Wood College, some years later, that I was corrected!

Largely geraniums, pelargoniums and erodium’s share the same characteristics and so they fall into the same Family known botanically as Geraniaceae. There are seven recognised species within the Geraniaceae family, but I’ll concentrate on the three largest. My crude diagram below shows the Geraniaceae family tree and the three largest genera, pelargoniums, geraniums and erodiums. As you can see the confusion comes from the common names as opposed to their botanical names. The storksbill, cranesbill, and heronsbill names refer to the shape of the seed head they each produce. Gernos is ancient Greek for Crane, Erodios is ancient Greek for Heron and Pelargos is ancient Greek for Stork. 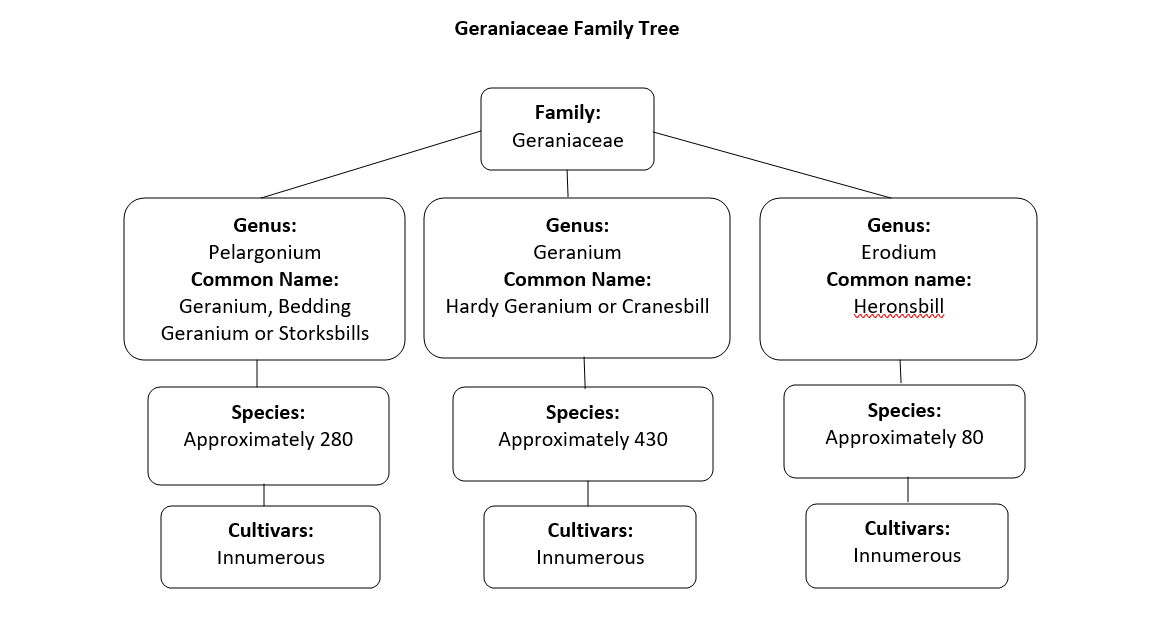 Pelargoniums are heat and drought tolerant, some have scented foliage (these are known as scented geraniums), half-hardy perennials and shrubs, they are tender and will need to be overwintered in a light frost free place, such as a conservatory or insulated green house.

Geraniums are all herbaceous perennials and reliably hardy, though some species such as the maderense and canariense, coming from warmer climates, should be treated as tender in the UK at winter. They are heat and drought tolerant, though the pratense species and its hybrids can be susceptible to powdery mildew if they dry out and endure too much water stress. There is a species suitable for every location, shade, dry, damp, full sun, containers etc.

Erodiums are excellent for an alpine or container setting, preferring drier conditions and needing good gritty drainage to avoid roots getting too wet. They will not thrive in deep shade or wet conditions. Generally, they grow into small, compact clumps and are perennial similar to G. cinereum.

This site uses cookies. By continuing to browse the site, you are agreeing to our use of cookies. Find out more.